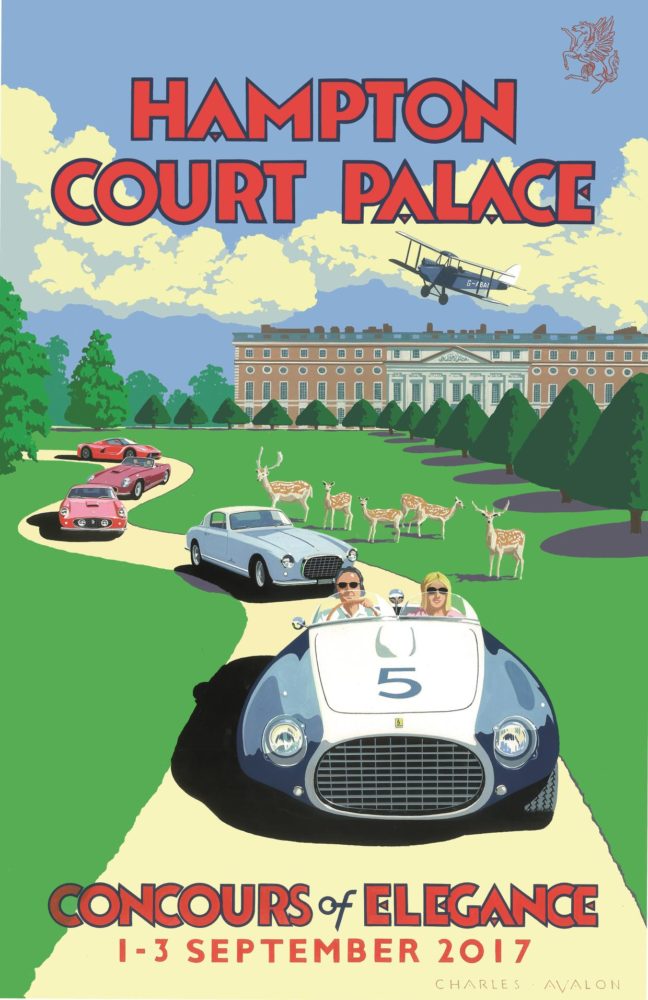 Concours of Elegance has revealed the official poster for the 2017 event, featuring a selection of the seven incredible Ferraris confirmed to form part of the Main Concours this year. Kicking off with the 1952 Ferrari 342 America Pininfarina Coupé and ending with the Ferrari LaFerrari Aperta, it’s a real celebration of one of motoring’s most famous icons.

The poster – illustrated by Charles Avalon –  reveals a parade of Ferraris travelling away from Hampton Court Palace, led by a 340MM Vignale Spyder and 375 America Pininfarina Coupé Speciale. This 375 – displayed at the 1953 Geneva Motor Show – is one of Ferrari’s most exclusive models ever, with just three built.

A Ferrari in attendance with a particularly interesting history is the 250MM once raced on the Carrera Panamericana. The man at the wheel was Mexican, Efrain Ruiz Echeverria, tackling the Panamericana in 1953 among a world-class grid of drivers and cars. Phil Hill was there in a Ferrari and Fangio in a Lancia, along with Taruffi and Castelotti, so Echeverria certainly had a challenge ahead of him. Nevertheless, Echeverria finished the race in seventh as the top privateer – an incredible achievement.

Leading the parade of Ferraris in Concours of Elegance’s 2017 poster is the Ferrari 340MM Vignale Spyder. Conceived to win the ’53 Mille Miglia, this particular model was extensively raced in period, including a fourth-place finish at Silverstone and a victory at the Sowega National Sports Car races.

The 250 GT SWB Competizione coming to Hampton Court Palace represents the end of an era for Ferrari, as the last car that customers could race successfully – without serious modification – and then drive home in. As an example, 250 GT SWBs finished first, second and third racing at Le Mans in period. The exact car coming to Hampton Court Palace had a successful career of its own, finishing third overall at Spa and first in class at the Tourist Trophy.

Also a member of the 250 family, Concours of Elegance will be welcoming the 250 LM Scaglietti. The very example coming to Hampton Court Palace boasted a number of racing successes in period, including an overall win at the 12 Hours of Reims in 1964.

Into the late ’60s and the Ferrari 330GTS coming to Concours of Elegance exemplifies the kind of more comfortable, easier-to-drive Ferrari that followed the 250 GT SWB Competizione. With only around 100 GTS variants built, and power coming from a 4.0-litre V12, Ferrari had lost none of its exclusivity or performance.

Representing the very latest of the Ferrari model line-up is the Ferrari LaFerrari Aperta. The open-top version of Ferrari’s latest flagship model, pairs a 6.0-litre V12 engine with an electric KERS system to produce almost 1000hp.

Concours of Elegance Director, Andrew Evans, said: “Once again we have an incredible piece of art deco design for our poster, perfectly capturing the event and some of the very special Ferraris that will be joining us this year. It’s Ferrari’s 70th anniversary, and our Steering Committee has helped pull together the most amazing collection of rare and important Ferraris for visitors to enjoy. Add in thousands of other exclusive vehicles, luxury brands and plenty of entertainment, and you can see why we’re calling this year’s event the biggest and best yet.”

The Concours of Elegance 2017 poster is available now from www.pullmaneditions.com