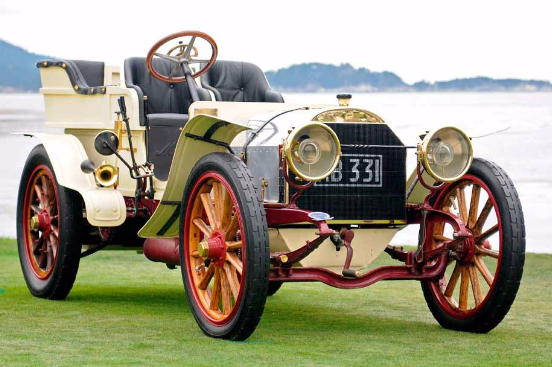 Sophisticated and fast, Mercedes-Simplex models were among the elite cars of the pre-1910 era. This particular example, with its 32bhp in-line four-cylinder engine, was ordered in July 1903 by Emil Jellinek, the influential Mercedes agent for southern France, but didn’t reach
its first owner, an HB Hills of Paris, until late April the following year.
For the next few decades the car seemingly led a quiet life, largely hidden from view, and managed to survive two World Wars without being damaged or seized. It was passed between several private collections before unexpectedly resurfacing at the 1974 London to Brighton Veteran Car Run.
At some stage during the intervening years the Mercedes-Simplex had been modified, reimagined as  a two-seater racing car, although whether it was ever used competitively is uncertain. In 2002, its then-owner sent the car to the Mercedes Classic Centre in Stuttgart
for a comprehensive expert examination to determine what its factory specification would have been.
The information obtained during that examination was later used by the Mercedes Classic Centre to restore the car to its 1903 form; this included the fabrication of a new five-seat, rear-entrance tonneau body