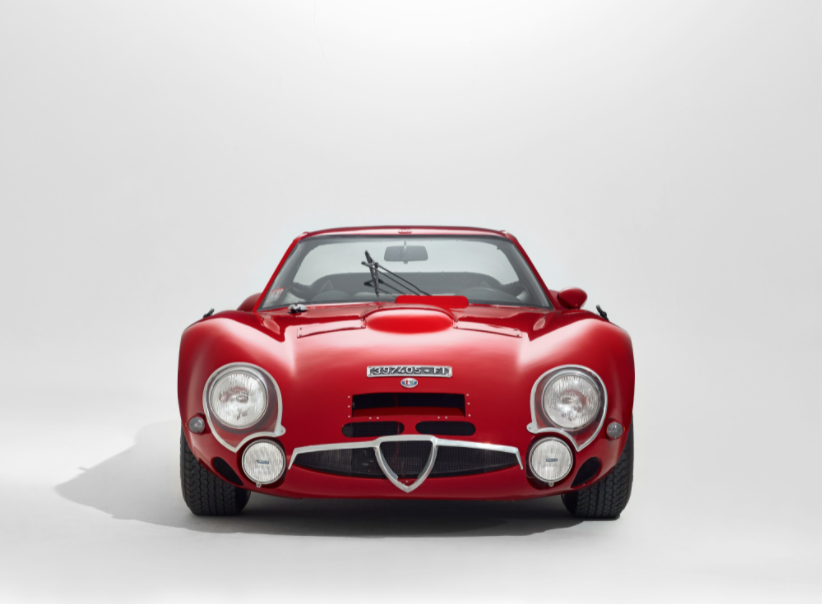 Established in 2012 to bring together the world’s rarest cars, the Concours of Elegance 2021 is once again set to gather the finest line-up of vehicles on display in the UK this year.  With just two weeks to go until the event opens to the public on Friday 3rd September, the full list of cars at the heart of the Concours of Elegance has been revealed, charting the full evolution of luxury and innovation in automotive from the pioneers right through to the modern day. Below are just a few examples confirmed to appear. 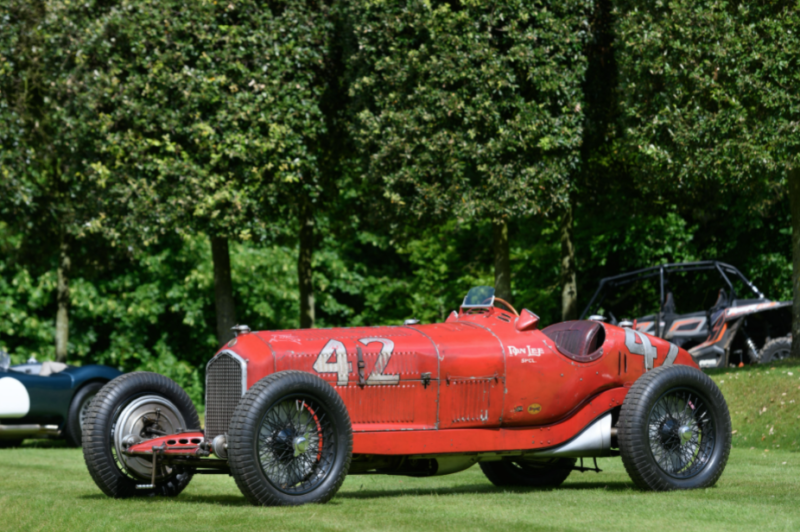 The Alfa Romeo P3 Tipo B was a true trailblazer – it was the first proper single-seater racing car. Powered by a supercharged V8 and weighing a mere 680kg, it was immediately successful, with Tazio Nuvolari scoring a victory in its first event halfway through 1932. He and Rudolf Caracciola would take a further five victories apiece that season.

Money troubles at Alfa Romeo the following season meant that the P3s simply weren’t raced until significant arm-twisting from a certain Enzo Ferrari released the cars to his Scuderia partway through the season. This model, chassis 50007, was ordered direct from Alfa by Scuderia Ferrari in ’32. After the 1935 season, a 19-year-old Count Jose de Villapadierna stole his aunt’s jewels and, with the proceeds, rushed out and bought 50007 from Ferrari. On crossing the border into Spain with the car, he was arrested and jailed until his aunt decided to forgive him. He later raced the P3 over a few seasons, but the Spanish Civil War intervened and he stopped racing, selling the car to England in 1938.

Frank Griswold bought 50007, and in 1939 he hired Louis Tomei to drive it at the Indianapolis 500 Classic, where it finished 15th. Griswold then sold the car to Tommy Lee in LA in around 1945, who entered it at The Brickyard with some success, running the Alfa as the Don Lee Special. The Lee Broadcasting team fitted the world’s first pits-to-car radio system to 50007, and it was the first car to be flown to a race. 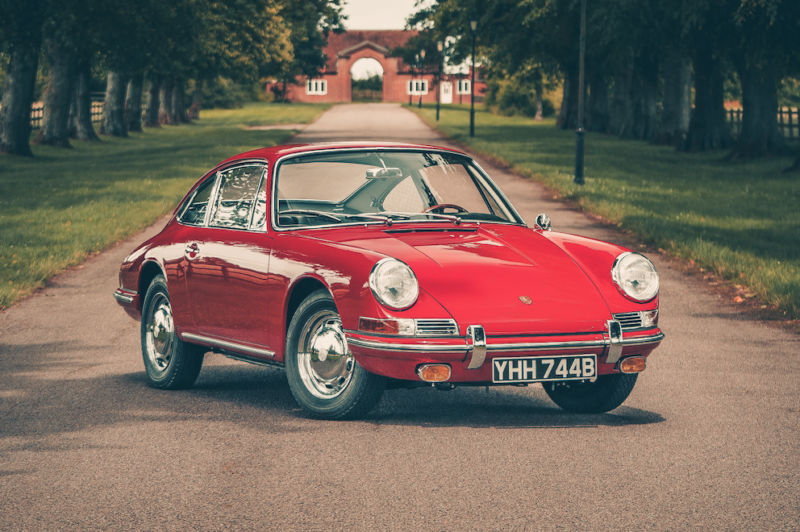 When the Porsche 901 was presented at the 1964 Paris Auto Salon, Peugeot took umbrage at its German rival using any three-digit number with a 0 in the middle. Porsche would change the moniker to 911, despite having built 82 pre-production cars bearing the 901 title. It was claimed no examples were sold to private customers, but some have trickled out of Porsche’s possession over the years.

Chassis 300078 is one such car, and has quite a story, having been displayed at the Geneva Motor Show in March 1965, announcing the 911 to the world. Despite the change

in nomenclature, this 901 is one of six believed to be left. Although outwardly very similar to the later cars, the first 82 differ slightly. The earliest examples have their A- and B-pillars trimmed in the same perforated white vinyl as the headlining, while later cars used black vinyl. The engine lid is unique to these cars, too, as was the rear licence-plate holder. The rear crossmember is completely smooth with no pressings, while the front wings house four-hole chrome horn grilles. 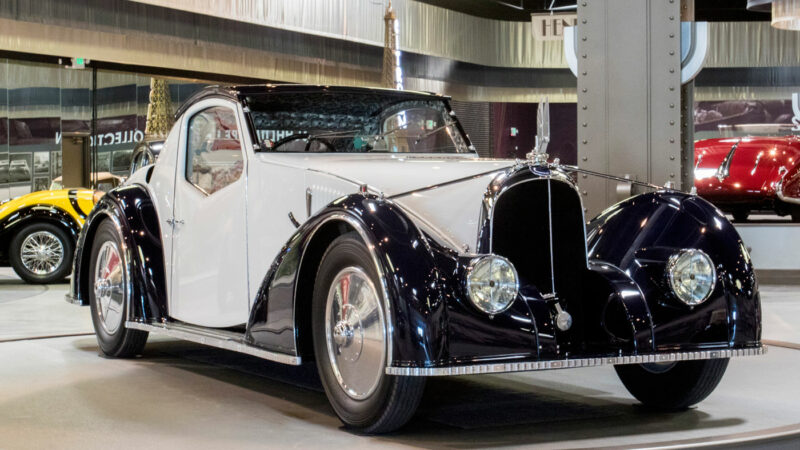 The origins of the C27 Aérosport lie in the Aérodyne – a provocative car created for the 1934 Paris Motor Show that didn’t quite hit the mark in terms of sales. After the expo, two roadsters were built on shortened Aérodyne chassis – which became known as the C27. Powered by a 3.0-litre straight-six engine, it was good for 105bhp. However, it is the glorious Art Deco styling that captivates the heart. Using the basic outline of the Aérodyne as a start, it’s lowered, has more luggage space, pentagon side windows, piano-hinged doors and aluminium accents. It also features a sliding roof powered by it own motor that works off the main engine’s vacuum.

In the mid-1950s this car was offered for sale in France by marque expert Robert Saliot and the Saliot Garage. The garage owned all of Voisin’s spare parts, and Robert’s student son used the C27 for day-to-day transport. At this stage, the coachwork was modified, with poor metal-sheet patch repairs to the roof. Stewardship was then passed to a scrap dealer, and the Aérosport disappeared for some time.

One day, Phillip Moch, a Voisin expert and hoarder of marque parts, acquired an ailing Voisin that had a second body. Removing this outer layer, he found the distinctive underslung chassis and the remnants of the C27 Aérosport. 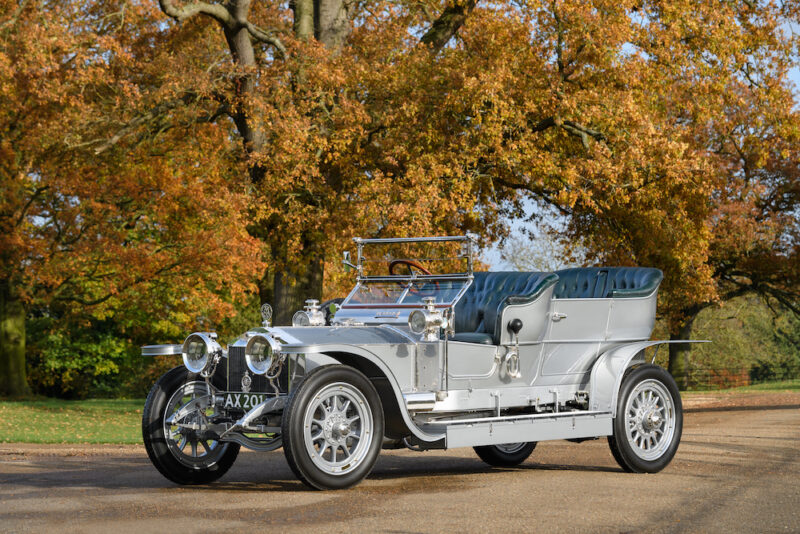 The Rolls-Royce 40/50 chassis and engine had many names and roles – it even formed the basis of a range of armoured cars. However, when The Autocar called it “the best car in the world” and coined the phrase Silver Ghost, a legend was born – the car you see before you.

Chassis 60551 was the 12th 40/50 off the line, and it was destined to be a company demonstrator. Registered as AX 201, it was given a Roi-des-Belges body by Barker, and finished in aluminium paint. At a time when most cars were as noisy as they were unreliable, the model’s distinctive looks and relative serenity in motion lent it the Silver Ghost name. The car would break record after record, one of which included driving between London and Glasgow 27 times over a distance of 15,000 miles. Such reliable service provided the marketing backbone for the then-new Rolls-Royce Motor Company, rightfully earning that “best car in the world” title – one that is still used by the company today.

After a three-year restoration between 1948 and 1951, AX 201 entered service as a promotional tool, travelling around the world. In 1984 Franklin Mint took extensive photographs of the car while it was in storage, and produced a die-cast model that went on to become one of the firm’s best-selling models.

With Rolls-Royce Motors Ltd being sold in 1998, AX 201 ended up in the stewardship of Bentley Motors as part of the purchase of the Crewe Works by the Volkswagen Automotive Group. In late December 2019, AX 201 was purchased from Bentley and entered into private UK hands. 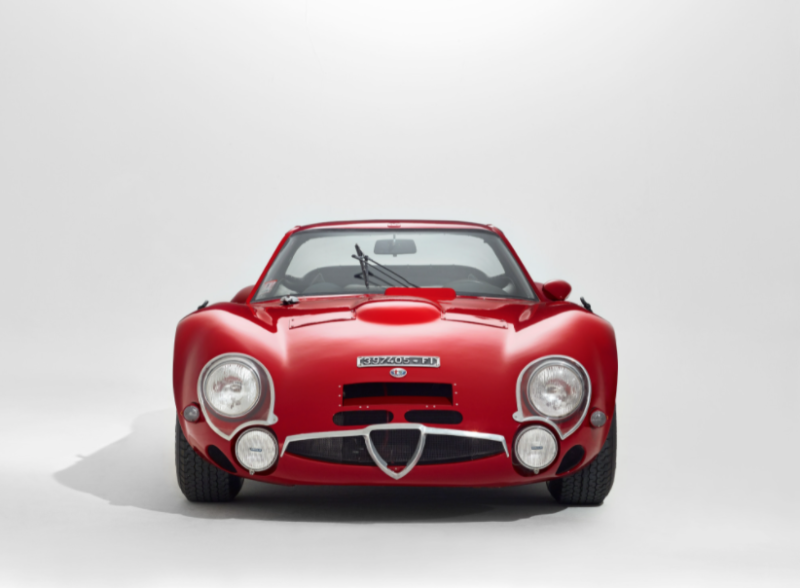 Zagato might be known for its outlandish and sometimes challenging designs, but the heart of the Italian carrozzeria’s original mission was always light weight and slippery aerodynamics. The original TZ exemplified this starkly – its Ercole Spada-penned all-aluminium body weighed just 650kg, and was at the cutting edge of bodywork design thanks to its coda tronca ‘Kamm’ tail design.

For the TZ2, Zagato went even further, replacing the aluminium body with glassfibre to shave a further 30kg. Just eight were built, all as racing cars, and they used an Autodelta-tuned 1.6-litre twin-cam four-cylinder that produced 170bhp – good for 152mph thanks to that wind-cheating design.

The car at the Concours of Elegance, chassis AR750113, is the most successful TZ2. In 1966 it took class victories with Autodelta at the Nürburgring 1000km, Trento-Bondone, Circuito Del Mugello, Corsa Della Mendola and the Coppa del Chianti Classico, where it also finished first overall. However, its biggest success came at the Targa Florio, again run under the Autodelta banner. With Enrico Pinto and Nino Todaro behind the wheel, the car finished fourth overall and first in class.

While these cars form the Main Concours that acts as a centrepiece to the event, a total of nearly 1,000 cars will be on display over the course of the Concours of Elegance, including a collection of 95 British cars gathered to celebrate Her Majesty The Queen’s 95th birthday, and a 30UNDER30 Concours aimed at inspiring the next-generation of classic car enthusiast.  Special features for 2021 will also gather together a line-up of Future Classics, representing the potential concours d’elegance stars of the next 50 years, a celebration of 60 years of the Jaguar E-type and a Veteran Car Run display, gathering the pre-1905 motoring pioneers that each year make their pilgrimage from London to Brighton.

Tickets to the Concours of Elegance 2021 are available now ranging from standard entry tickets to full three-course hospitality packages from £288. Tickets can be bought from concoursofelegance.co.uk/tickets

The full list of vehicles in the Main Concours is: