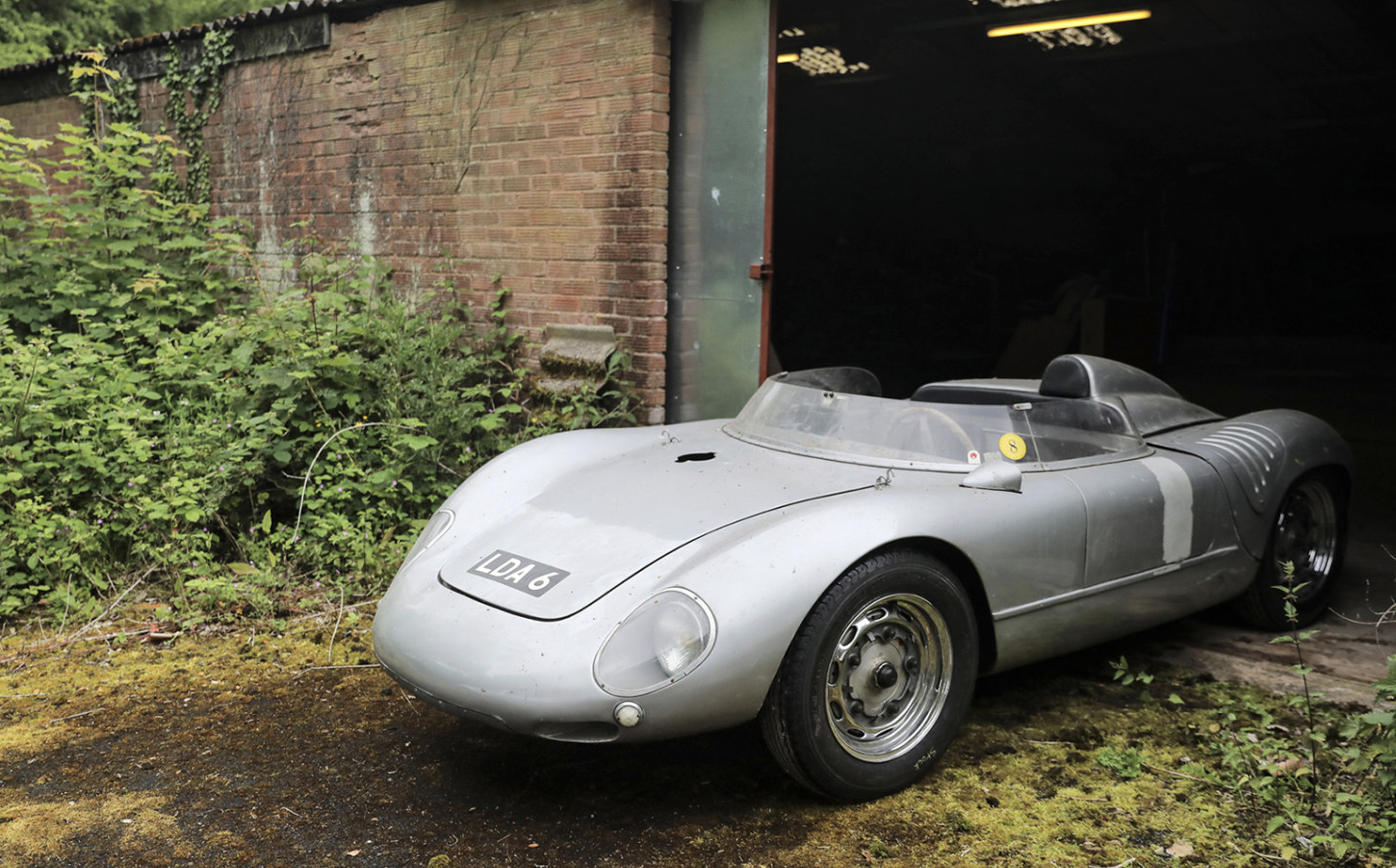 Concours of Elegance Official Auction Partner, Gooding & Company, has revealed another group of exceptional consignments for its upcoming London Auction, set to take place in conjunction with the event at Hampton Court Palace later this summer. In addition to a barn-find 1956 Porsche 550 Spyder, the official auction house of the Concours of Elegance will sell a 1912 Rolls-Royce 40/50 HP Silver Ghost Tourer, a 1937 Bugatti Type 57C Ventoux, and a 1965 Alfa Romeo Giulia TZ during its auction on 3 September. Two of these lots, the Porsche 550 Spyder and the Silver Ghost Tourer, will be available for preview at the London Concours, taking place next week from 28-30 June at the Artillery Gardens of the Honourable Artillery Company’s headquarters.

“We are delighted to debut this wonderful quartet to our lineup for the London Auction, which is shaping up to offer an incredibly diverse selection of cars that will provide opportunities for collectors interested in all eras and tastes,” said Gooding & Company European Sales Consultant, Joe Twyman. “To have the chance to unveil this Porsche 550 Spyder publicly for the first time in over three decades is especially exciting, and it will be quite an unforgettable experience to witness it seeing the light of day for the first time in a very long while.”

1956 Porsche 550 Spyder (Estimate: £1,250,000 – £1,750,000) A purpose-built competition car that elevated Porsche’s motor sport status in the 1950s, the 550 Spyder quickly became one of history’s most important race cars, clocking significant victories at Nürburgring, Le Mans, Carrera Panamericana, and the Buenos Aires 1000 Km. This particular 550 Spyder, chassis 550-0079, was completed on 2 February 1956, and was subsequently used for a promotional image outside of the Porsche factory to demonstrate the wide range of color options available for the model. This example was originally finished in red with white darts. 550-0079 was initially sold to Rita Rampinelli, a notable Swiss female race car driver who competed with the Spyder for a brief period of time before passing it on to fellow Swiss competitor, Heinz Schiller. Schiller competed with the car across Europe at circuits such as Monza and Avus, as well as in his home country of Switzerland. The car was then owned by a third racing driver, Edouard Margairaz, who continued to regularly enter the car in Swiss hill climb events.

It is believed that during the 1960s, this example was upgraded with “werks” factory components to bring the Spyder more in line with the modern Porsche variants of that time in an effective attempt to “upgrade” the car. These components included a factory engine and the updated RS60 bodywork, which the car still wears today. Paperwork accompanying chassis 550-0079 suggests that the car eventually passed through the hands of famed Swiss Grand Prix winner and former F1 ace, Jo Siffert, and was later owned by Herbert Kuke, who sold it to the consignor’s family in July 1982. It has remained in its current ownership since then, belonging to a renowned collection in the UK consisting of many other great classics. A true barn-find, this 550 Spyder has been mainly kept out of the public eye and not seen the light of day for nearly 35 years, save for two appearances in the 1980s at the Oldtimer Grand Prix and a historic race at Zolder. Coming to auction in “as-found” condition, this enthralling find with robust provenance, including some of the greatest Swiss names in motor sports, presents a truly unrivaled opportunity.

1912 Rolls-Royce 40/50 HP Silver Ghost Tourer (Estimate: £2,500,000 – £3,000,000) The Rolls-Royce 40/50 HP model entered the world stage when it debuted at the Olympia Motor Show in 1906, and it quickly awarded the English automaker with a reputation for making “The Best Car in the World.” For the next two decades, Rolls-Royce would go on to produce 6,173 Silver Ghosts, celebrated for their quality, engineering, and reliability. The Silver Ghost presented here, chassis 1921, is a remarkable parallel-bonnet example and one of the precious few that retains its original open coachwork. This well-regarded Rolls-Royce has survived intact for over a century, serving as a marvelous testament to the inspired engineering of the Silver Ghost. Chassis 1921 is presented with exceptional provenance, consisting of notable owners such as pioneering American car collectors Bill Pollock and Henry Petronis.

1965 Alfa Romeo Giulia TZ (Estimate: £1,000,000 – £1,200,000) The Alfa Romeo Giulia TZ was one of the most successful competition cars of the 1960s, produced in extremely limited numbers with only 112 built in total between 1963 and 1967. The beautiful Tubolare Zagato (TZ) models were introduced in 1963 to succeed the Sprint Zagato (SZ) models, and featured a new tube-frame chassis that allowed for a more lightweight, aerodynamic body. The TZs were built in the shops of Autodelta, the official race team of the Alfa Romeo factory. These very rare and purpose-built competition cars quickly became successful racers, capturing wins at the 12 Hours of Sebring, the Targa Florio, Nürburgring, and Le Mans. The Giulia TZ presented here, chassis 750081, was sold new to Luigi Citeroni of Ascoli Piceno, Italy, and it remained in the country for many decades, undergoing a restoration in 1984 by noted marque specialist Dino Cognolato. Among its many outings with enthusiast owners, this spectacular Alfa was entered in the 2011 Tour Auto, which celebrated the longstanding and influential legacy of Zagato. Having undergone a refurbishment in its previous ownership, this special Alfa Romeo Giulia TZ offers a significant piece of Italian motoring history for its next fortunate custodian.

1937 Bugatti Type 57C Ventoux (Estimate: £800,000 – £1,200,000) Unveiled in 1934, the Bugatti Type 57 was masterfully designed by Jean Bugatti as the successor car to the Type 49 model. The 1937 Bugatti Type 57C Ventoux presented here, chassis 57506, is a particularly stunning example which still possesses its factory-delivered supercharged engine. Beautiful both in appearance and stature, this sympathetically restored Bugatti is presented in attractive colors, and retains its spectacular, well-preserved original upholstery. Chassis 57506 is bound to capture the attention of enthusiasts and collectors who appreciate the glamor of prewar European classics.

London Concours The barn-find 1956 Porsche 550 Spyder, as well as the 1912 Rolls-Royce 40/50 HP Silver Ghost Tourer, will join two more cars at the exclusive preview of Gooding & Company’s September London Auction at the London Concours, taking place from 28-30 June in the Artillery Gardens of the Honourable Artillery Company’s headquarters. The recently announced 1960 Ferrari 250 GT SWB Berlinetta Competizione and the 1932 Bugatti Type 55 Cabriolet from the upcoming auction will also be on display. Interested parties are encouraged to speak to team members at the London Concours for more information on the Gooding & Company auction this September at Hampton Court Palace. 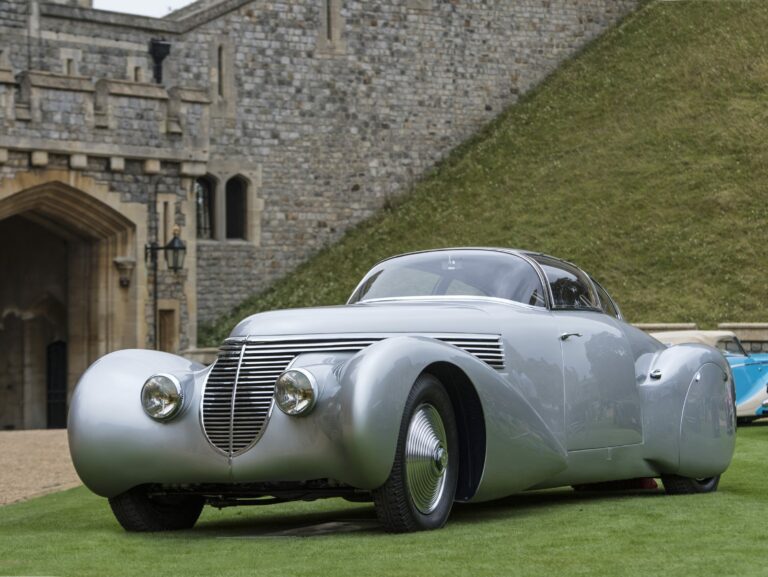 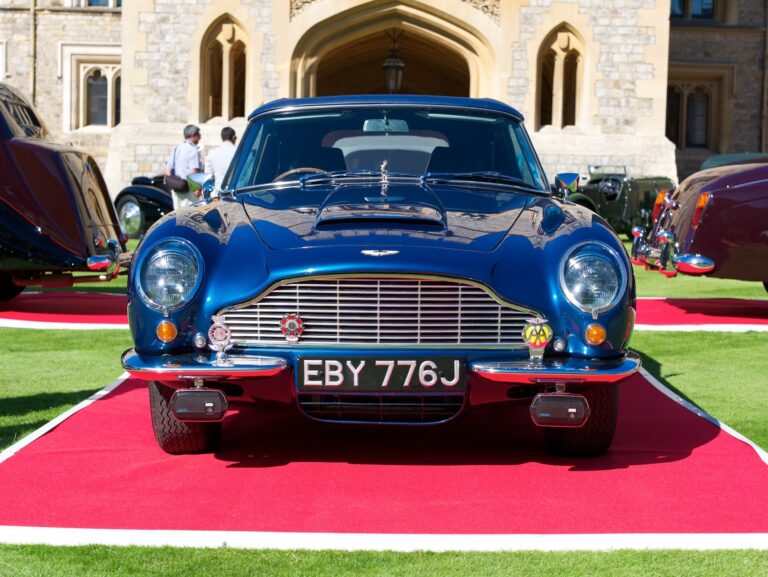